LET’S TALK ABOUT SOME OF THE VARIANTS 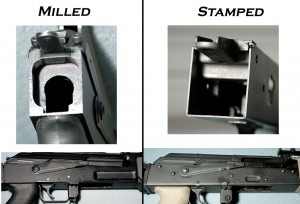 Stamped vs milled receiver. In the top photos you are looking at the rear end of the rifle with the butt stock removed. Bottom pics are the right hand side of the rifle. Notice the difference directly beneath the charging handle.  Ak 47 on the left, AKM on the right.

We are going to have to start at the very beginning because it will affect some of our choices later. Lets just get a few basics out of the way. The original AK 47 rifle began production in 1947 hence the “47” designation. While “AK 47” has become synonymous for all the variants it is not accurate to call everything an AK 47. What do I mean? Well here it is. If you call a rifle an “AK 47” it generally refers to rifles produced between 1947 and 1959. These were the original milled receiver rifles. Meaning that the rifle’s receiver was actually machine milled out of a solid block of steel, an expensive and time consuming procedure. In 1959 the Russians introduced the “AKM” rifle. The AKM was an improvement over the original AK 47 primarily because it reduced the cost, time, and the complexity of machinery required to manufacture the rifle. They did this by replacing the milled steel receiver with a stamped folded receiver. There were some other design changes that improved reliability, reduced weight, and increased accuracy particularly during automatic fire, but primarily it was the adoption of that stamped sheet metal receiver. That innovation is our number one concern, that receiver. 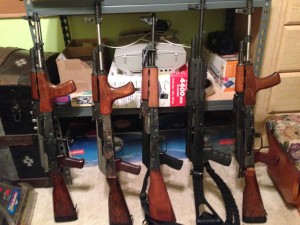 Some of my previous builds.

Then in the 1970’s the Soviet Union adopted a new rifle designated the AK 74. Again there were some modifications of the design, but the biggest factor for our concern is that they changed the caliber from 7.62×39 to 5.45X39. Now of course there are a whole mess of other configurations and variations out there. Considering that the rifle was manufactured in so many different places, over such a long period of time, and in such quantity it is easy to see how many variations on the same theme you can find. One important thing to note here is that this can cause you head aches if you are not careful. For example, while a Yugoslavian barrel will fit inside Romanian or Russiantrunnion, other barrel components are not interchangeable. If you buy a Polish Tantal barrel and try to use it on an Egyptian kit your gonna have problems. Some countries that manufactured the AKM changed dimensions and parts and they are not all interchangeable. We will talk about this more later so that you can avoid any expensive headaches or unnecessary stress. In the interest of keeping this simple right now, we will discuss just these three basic variations. The AK 47, the AKM, and the AK 74. 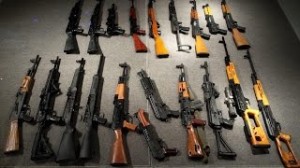 So how does this affect us? There are two big factors to consider here. One is that we are not going to be able to reproduce a milled receiver, that’s way too complicated for the vast majority of homebuilders. We are going to reproduce the stamped sheet metal receiver of the AKM. There are companies that produce milled receivers that you can assemble your rifle on, but they are expensive and not what I consider an ideal starter project, not to mention that they are considered a firearm and must be purchased through an FFL dealer. So what we will be building will be an AKM. As a side note, several years ago the US government started requiring that imported kits have their barrels removed and or destroyed. This creates an option for us later when we begin our build. What some companies did was they began to install head spaced US barrels on the imported kits. This is a service that, of course, is typically reflected in the price of the kit. I like to stay on my wife’s good side and keep my costs as low as possible, so I will discuss an alternative less expensive choice later.  So I have indirectly led us to the other important consideration here, which is your chosen kit’s caliber, be it in 7.62 or 5.45, the AKM or AK 74. The inclusion or absence of a barrel in your kit and whether or not that barrel is populated with its components will affect the amount of work that will be needed later as well as the tools required to do that work.  Its something to think about when we begin going over the tools, but I’m getting ahead of myself. 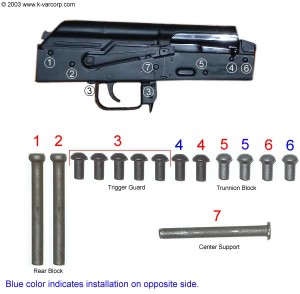 Ok, so we have laid a little bit of groundwork. Time to start making some basic decisions. At this point you pretty much have two paths you can follow. Screws or rivets? There are two methods used to build the AKM rifle. The first method, and the only one that I am familiar with, is a process of riveting, this is how the rifles are originally manufactured. The second method, which I will not discuss as I have never done it, is using screws to build the rifle. There are pros and cons to both. A screw build is going to require fewer tools and therefore will be cheaper to build. It will require that you “tap” the trunnion (we’ll discuss parts later) to create threads to insert the screws. A rivet build will require a jig to hold the parts and apply pressure where needed. 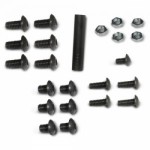 I prefer the rivet method for a couple of reasons. First, it is, as mentioned earlier, how the rifles are manufactured at the factories, it is original. Second, I have a concern, whether it is justifiable or not, that the screws may work themselves loose overtime and repeated firing. The rivet of course is solid and is not going anywhere. At this point just know that there is an alternative to riveting the receiver commonly referred to as a screw build. How much money you may save in procuring tools is arguable. If at this point in time you have looked into it and you have decided that a screw build is right for you, then I would encourage you to seek out more information online.  This tutorial may be useful for you to help you decide what is right for you but I will not explore the dynamics of a screw build as I have never done one myself. 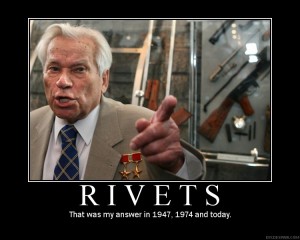 For this tutorial we will be discussing the more popular and more widely accepted method of riveting.  In the next section we will begin discussing the necessary tools at length.  This is not necessarily my favorite topic, but you will need the right tools for the job.  If we don’t sort out what you need to achieve our goal, your build will never get off the ground and your kit will likely end up sitting in your closet or garage for the next ten years.