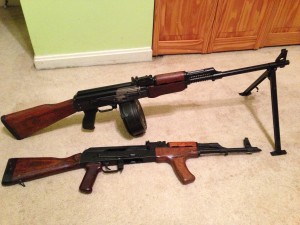 About two years ago I became interested in building an AK rifle. I had dabbled withsome amateur gunsmithing in the past, but I had never taken on a project like this before. My interest was initially peaked by watching some videos people had put together on the subject. So I started absorbing as much information as I could about it. I was reading everything I could find, I was watching videos, and window-shopping some of the vendors sites on line that sold the tools and kits. It became a bit of an obsession for me.

So after some extensive research and a slow but steady accumulation of tools I finally got started with my first project rifle. When I was finally finished with it and was able to take it out and shoot it, I was hooked. How a bag of greasy old metal parts could become a working functioning rifle by my hands was amazing to me. I loved it. Since then I have put together a number of rifles. I’m a novice by many standards for sure, but I have learned a few things along the way. 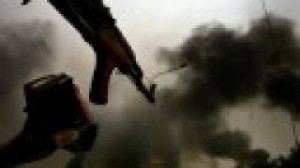 A TRIBUTE VIDEO TO THE AK47.

I should preface the rest of my commentary by saying that I am not a machinist or a metal worker by trade. I have never had any training fabricating metal or working with machinery at all. I have never received any formal gunsmith training what so ever. I am quite simply an AK enthusiast, and that is pretty much it. That being said, I think it is a little easier to understand the confusion that I personally experienced during my own “research”.  I discovered that there were a lot of people posting some excellent information on the subject.

The problem for me was that a lot of what was available was over my head.  I just didn’t have enough experience to understand some of what was being done. I didn’t understand things like what a trunnion was, or how head spacing was done, or why it was even important for that matter. I had hard time following some times. The other big problem was that while there was good information available, it was sporadic. There was some good stuff on one site and some good stuff on another, but there was no real compilation of material that I could reference easily at one spot. That brings me to where I am now. 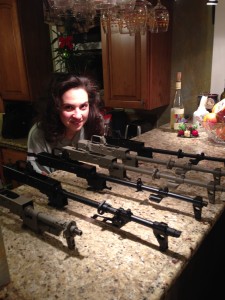 My wife supervising some of my work.

I was intimidated by the idea of attempting to build my own rifle. Many of the tutorials I watched didn’t help, some of them made it worse. They made some things appear to be much more difficult then they ended up being. This nearly caused me to give up more then once before I even got started. I started thinking about the cost involved and what would happen if I damaged expensive parts or I did some things wrong and wasn’t able to get the rifle functional and safe. If I had not pressed forward and done it the very first time, I would never have known the satisfaction and pride I felt when I got that first kit together.

It was a trial at times, but it was a labor of love and in the end I was glad I did it, really glad. I was glad I didn’t listen to the “nay sayers”. It’s not too complicated and you don’t need a trained gunsmith to do it. It was really awesome, I did it and enjoyed it and you absolutely can too. That struggle I felt in the beginning, more then anything, led me to constructing this tutorial. I felt I could help people just like myself to get started in this hobby. If you are like I was, and all you are currently armed with is a desire, I believe I can help you. Look at me, I’m three quarters crazy, have no skills or training, and I was able to do this.  So I am confident that you can too. 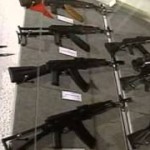 Tales of the gun AK 47 episode. It is worth watching.

I am going to endeavor to assemble a comprehensive guide for the beginner. If you’re an experienced builder you may find something here that you like, but I intend to cater to the absolute novice. If you are reading this, you are defiantly capable of building your own AK, all you have to do is have an interest in it. I am not going to tell you that you won’t experience frustrations along the way, but the reward is well worth it. To see your hard work come to fruition in the form of a beautiful functioning fire arm, a piece of military history, is a joy that I would like to share with you. Let’s get started. 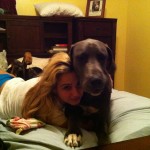 My beautiful wife and one of our many mutts (Mercury).

Really why not? Why exactly would you choose the AK rifle for a build project? Why is it that there exists this fringe group of enthusiasts, that like this rifle so much? I mean after all, why not an AR rifle right? The AR is our, our all American rifle, everyone is familiar with and anyone that spent any time in the military knows how to pull it apart and put it back together again. I’m not going to bash the AR, I love it, I spent four years in the Army infantry and I’m very comfortable with it, but the AK is something very special and exotic. Honestly what’s not to like about it? 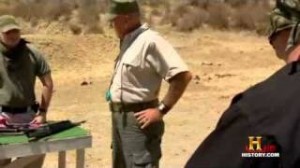 The AK is the most massed produced rifle in history period. Over 100 million rifles have been produced in many variations in over 30 different countries worldwide. Its design is simplistic and its reliability is positively legendary. Relative to many other modern assault rifles it is very inexpensive and it is comfortable to handle. It also provides a competitive level of accuracy and firepower for a military service rifle. These factors have been more than enough for the majority of the world’s militaries to select this rifle over its competitors. Last count I believe it was 106 countries worldwide use the rifle in its many variations. Even if you’re a diehard AR fan you have to enormous respect what the AK has accomplished. Even the story of its

inception is remarkable. It is said that Mikhail Kalashnikov, a Russian and the man credited with its design, became interested in rifle design while he was recovering in the hospital from wounds suffered while fighting on the eastern front in World War two. The story goes that he overheard infantry soldiers complaining of the limitations of their rifles in the hospital and decided that he could do something about it. Propaganda or not, the story is inspiring. He saw his fellow countrymen suffering and took it upon himself personally to make a difference.  You have to respect that. Why else should you love this rifle? Because it suits our purposes perfectly for building from a kit. It will be relatively easy for us to build and we can do it with limited resources. 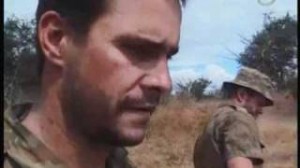 If I have sparked your interest, that’s great, I’m glad. In the next page we will begin to discuss some factors that will affect our choice in tools and the tools we will be considering acquiring to start our build.